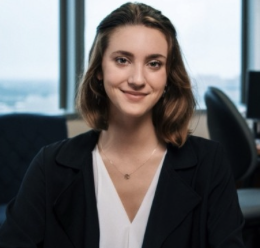 As one of Starling’s co-founders, Hannah McKenney has been developing this startup for 2 years, since graduating from Rice University. Read about Starling’s journey and how their business has developed and where they’re headed now.

What does Starling do and as a cofounder, what inspired you to launch your startup?

At Starling Medical, they’ve been building an at-home urine diagnostic remote patient monitoring platform that can be integrated into anyone’s bathroom routine. This device is called Urindex. Urindex is a low-profile device that fits into any toilet and can capture urine every time you use the bathroom. It tracks any molecules in your urine that can give you insight into your health conditions such as UTIs, bladder cancer, chronic kidney diseases, etc. For the past 4 years, they have been learning how difficult it was for patients to be able to translate how their health was affected by their chronic conditions and also the struggles of explaining to their source of clinical care what was happening to them. This inspired Starling to make healthcare more accessible and easy for people who are at risk for chronic health conditions

How did Starling come to be?

Starling was born outside of the graduate program Hannah and co-founder Drew were a part of at Rice University. They were partnered with Texas Children’s Hospital on a clinical need. This led them to spend a year understanding the patient need and coming up with concepts and prototypes. They went off to pitch their ideas and won a few design competitions. They later graduated, spent a few months searching the ecosystem, and ended up finding Alex, now CEO of Starling Medical. They have now hired 7 full-time employees after 2 years of operation. Hannah is excited about working with her team and getting to know the other members here at CUBIO.

Many startups will start working on an idea but then will re-conceptualize it. Has this happened to Starling? If so, what was the final result?

It definitely has happened to Starling. Though they’d rather call it hyper-focusing than pivoting. Both the business model and the product have been developed over time. When Starling originally joined CUBIO back in 2020, they were, in fact, a smart catheter company. This route ended up changing the more they spoke to their users. Those users just wanted something in their toilet that could tell them when something was wrong. That’s when they decided to start focusing on creating a tracking AI product that could deliver those results to patients.

Do you have any tips or advice for aspiring medtech entrepreneurs?

Hannah’s number one piece of advice was to listen to your users. She especially emphasizes this on Starling’s engineering team to validate any assumptions through conversations with their users, studies, and other relationships they’ve fostered such as partnerships. This has left a huge impact on Starling’s R&D. Moreover, Hannah mentions trying to have your team do as much as possible before bringing in outside help. She states, “If you’ve done a good job of listening to your users, you’re essentially the expert on the problem that you’re trying to fix. I’d say keep pushing to keep it in-house, hire if you need to, and you’d be surprised by what your team could build instead of paying double for another team to come back with you for something that you’ve probably already thought of.” In conclusion, you want to listen to your users and make the most from your team.

Are you considering building a startup?

At CUBIO, we support and encourage biotech and medtech startups with the services and resources for them to succeed. Take the first step and begin your medical innovation journey with us.